May I know how does Avivia MultiPay CI work? - Seedly

May I know how does Avivia MultiPay CI work?

I am confused about the layers of covers and how the claims works.

Attached is a screenshot of the payment structure. 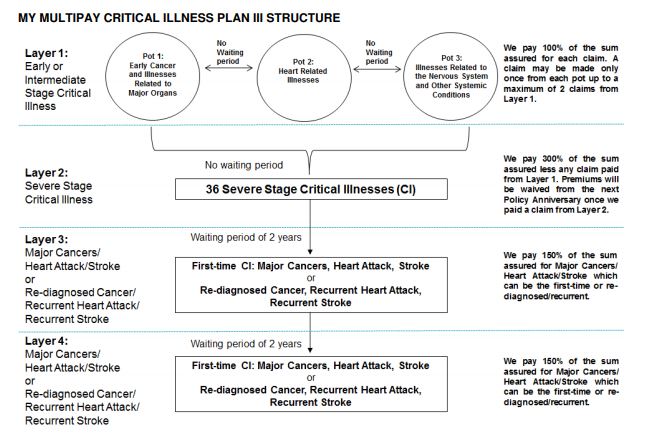 Of particular importance to note is

It's definitely not straightforward in terms of the structure, but the flowchart should help you visualise better. This structure is unique; other insurer multi pay plans work differently.

Feel free to reply to this post if you have questions.

I'd try my best to help simplify and explain the layers of coverage with the AVIVA MultiPay CI.

Layer 1 is for Early or Intermediate CI. It pays 100% of the sum assured. It helps you cover your gaps in Early critical illness coverage.

#Note: You can claim for 2 times with no waiting period between pots.

Layer 2 is for CI. It pays 300% of your sum assured (less any payouts from layer 1). It helps you cover your gaps in CI coverage which typicall requires a bigger amount. A guideline will be 5-10x your annual income.

Understanding these 2 layers first is mightily important. If you feel you have CI coverage settled already with other plans, then this layer 2 doesnt have much appeal. Maybe explore other multiple payout CI plans like AIA power critical cover or Singlife plan that can also cover you multiple times for early CI conditions.

But if you don't have much CI coverage yet and there is a gap to address, then this plan can be a great fit. It can also be considered against the TM Multicare plan which has similarities in benefits.

Now moving on to Layer3. There is a 2year waiting period. It is for re-diagnose of cancer, heart attack and stroke if it were already claimed in layer 2.

The term "first-time CI for cancer, heart attack and stroke" is if it was not claimed in layer 2. To explain it, look to understand the "POT" definition of the AVIVA MultiPay CI.

An example would be Kidney failure, it will be in POT 1 with cancer. If you'd claimed kidney failure in layer 2, you'd be able to claim under layer3 for this with the 2y waiting period fulfilled.

#NOTE: layer 4 is a similar understanding method for its benefits to you

If in doubt speak, drop me an email to [email protected] or speak to any qualified advisor. Below is an image of the structure of benefits. Hope it helps =) 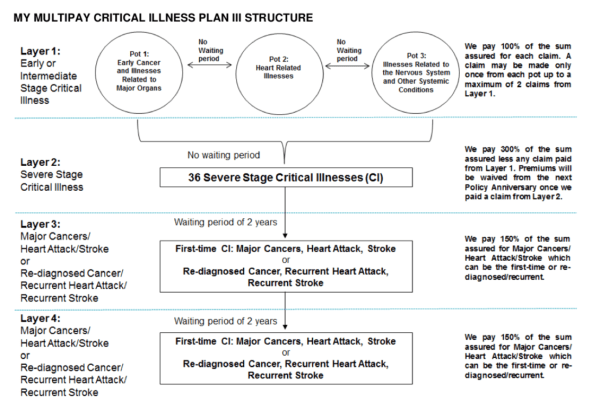 If prior to that payout for severe CI - you get 100k for early/intermediate CI (Layer 1) - it can be up to twice for different things but any payment here is just paying out the Layer 2 earlier.

Is this really confusing - YES. Why is it like this; Aviva is just responding to market practice, all the different companies CI products are complex. Makes it really hard to compare price.

planning to get married to a work permit holder, I want to know based on those that have experienced my situation on how does the process go? any way to hasten the approval time?
Some REITS in Singapore are doing this thing called Rights Offering. May I know how do these work and what are the implications on share price/shareholders?
I'm a graduating uni student that has a DBS student loan. May I know how can I find ways to grow my wealth i.e. how and where do i invest so that I can pay off the loan asap before getting a BTO flat?
I come from a relatively well to do family, and recently I've been getting to know this girl who is not well-to-do, we may end up together. How do I know she's not in this for the money?
I am using TD Ameritrade for trading on option & would like to know how do I know whether is my trade making profit or loss. Eg P/L open with ($1000) does it mean that I’m making unrealised loss now?