The Scam of The Century? - Seedly

The Scam of The Century?

Today, we take a tour of the most successful marketing campaign in history. 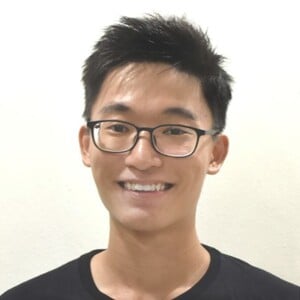 Three Rings for the Elven-Kings under the sky,

Seven for the Dwarf-Lords in their halls of stone, 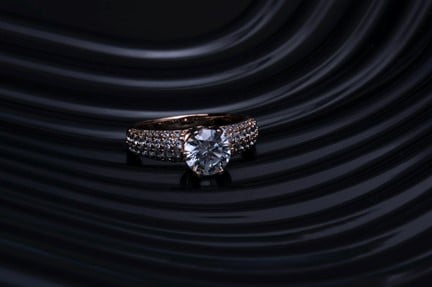 Look at that diamond ring just lying there, tempting us. Taunting us. Pulling us in.

The Lord of the Rings takes over and the struggle comes, tunnel vision closes our sight. The world turns dark and it draws us deeper and deeper into The Ring’s spell.

It's time to cast that evil carbon ring into the fires of Mordor and end it once and for all.

One Ring to Rule Them All

It is interesting to note that just roughly 80 years ago in 1939, a study called The Cost of Weddings by B.F. Timmons found that nearly 1/3 of married couples in 1939 did not exchange rings. What’s more, 9/10 of the rings exchanged had no diamonds.

Today, nearly all couples engage in a mysterious tradition of ring trading, and even more mysteriously, they are all spending a fortune on diamonds.

So, what happened in the past 80 years to cause diamond rings to catapult into a universal sign of love?

Diamonds were considered rare in the 1800s, where they could only be found in the riverbeds of India or the jungles of Brazil. In hopes of finding more sources for these valuable stones, British diamond companies decided to finance exploration of more diamond sources in Africa.

This investment worked out very well. Perhaps a little too well, as the exploration uncovered huge diamond mines in South Africa. In fact, this discovery found that diamonds were not rare at all!

The market was soon flooded with these shiny stones and the British diamond companies had to grapple with the reality that just overnight, their diamonds would become nearly worthless. And this is bad for business.

Thus in 1888, the competing British financiers merged into a united entity called De Beers Consolidated Mines Ltd. For the next 50 years, De Beers restricted the world’s supply of diamonds to maintain the illusion that diamonds are rare.

Reducing the supply as a strategy was successful for 50 years. However, in the 1930s, this proved to be insufficient as the Great Depression was going on and the prospect of another World War lurking around. Needless to say, demand for diamonds fell.

De Beers had to find another way. They enlisted help in the form of a marketing agency, N. W. Ayer to rekindle public interest and demand for diamonds. The President of N. W. Ayer, Gerold Lauck, came up with a genius advertising campaign which would impact young American couples for the next century.

Some of N. W. Ayer’s tactics revolve around areas such as:

The advertising agency created an arbitrary guideline to help young men decide how much to spend – one month’s salary. When the completely random benchmark worked so well, the ad campaign adjusted the number to two month’s salary.

The greatest advertising campaign in history continued for the next several decades.

In the late 1940s, the campaign moved from men to targeting the minds of young girls. The firm began visiting high schools to hold lectures on diamonds.

A Diamond is Forever

In 1948, the marketing firm coined the term, “A Diamond is Forever”, and the finances of newlyweds were changed along with it.

Till today, many young men feel a certain pressure to spend thousands of dollars for a symbol of love. Those who cannot afford the price typically delay or finance the purchase.

However, that is not enough for De Beers. After a successful foray into the Japanese market, they created demand for diamonds when there were previously none.

In China, no engaged couple took part in buying diamonds in the 1990s. today, the numbers have increased to one-third. This was all thanks to throwing marketing dollars into the Chinese markets. 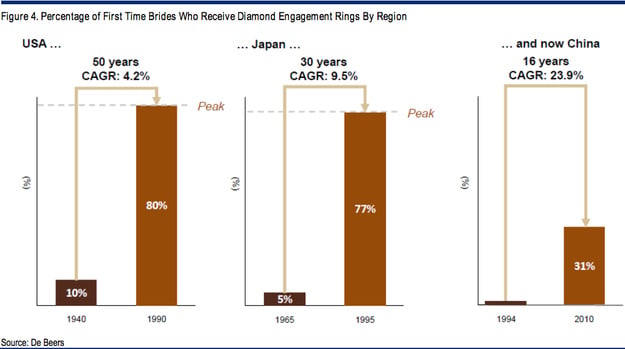 This explosive growth in demand for diamonds have left several African countries in a war-torn state and severely impacted their environment.

Just because something is shiny does not mean it is worth thousands of dollars. It is important to recognize what diamonds truly are: the product of marketing genius.

Except for a jeweler with a magnifying glass, no one can tell the difference between diamonds and Cubic Zirconia with the naked eye. Synthetic Moissanite stone consistently perform better than diamonds when it comes to brilliance. There are better alternatives out there, available for a fraction of the cost.

There’s also the option of our great grandparents, by ignoring these marketing tactics and recognizing that an expensive stone is not a requisite for loving someone.

Nice article. Recently, i watched "bad boy billionaires" in netflix.. nirav modi's story. Eventhough its not a scam but a fraud, It shows how these people mark up prices of diamonds ridiculously.

University student with a keen interest in personal finance.